Destroyed 9 times by earthquakes, eruptions, invasions, 9 times it has been rebuilt more beautiful than before. The Catania we see now is that of the last reconstruction, of 1693, when a violent earthquake destroyed most of the city.

Nothing is better than visiting the historic center of Catania on foot to fully grasp the history and spirit of this beautiful city. In 2002, among other things, this was named a World Heritage Site by UNESCO, and it is a Baroque blaze in which the Etna lava stone and marble enrich buildings and monuments.

Piazza Duomo, in the center of which there is a fountain and an obelisk on which the lava stone elephant stands as the symbol of the city since 1239 when it was first put on show. The people of Catania call it  “u liotru”. In this Piazza is also located the “Palazzo degli Elefanti” (Town Hall), Palazzo Chierici joined the Cathedral. In front of the Town Hall there is the “Amenano fountain”, that takes its name from the river that flows under Catania visible right under the fountain.

See also: 25 Best Things To See And Do In Palermo

This is the most important and scenic street of Catania, which starts from Piazza del Duomo: Via Etnea takes its name from the fact that it goes in the direction of Mount Etna, always visible during the 3 km walk.

Via Etnea is a place for strolling and shopping for the people of Catania and the tourists. Along the way, it is possible to admire the Sicilian Baroque as almost all the palaces and churches were built by the architects Vaccarini and Battaglia after the disastrous earthquake of 1693 that destroyed Catania.

For its exceptional acoustics, the theater has been praised by several tenors. 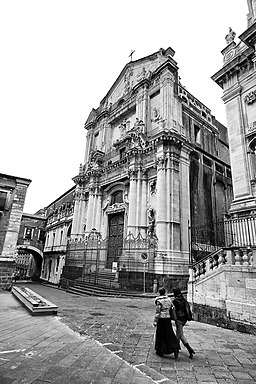 You enter the street from the Arch of San Benedetto which connects the church of the same name with the Convent of the Benedictines. The church is famous for the Angel staircase, a marble staircase with statues of angels.

Immediately afterwards we have the Church of San Francesco Borgia and the Jesuit College with a beautiful internal cloister and columns. In front of the college there is the church of San Giuliano, considered one of the most successful examples of Sicilian baroque. The walk ends in Villa Cerami, a green oasis which houses the Faculty of Law. Via dei Crociferi is protected as a UNESCO World Heritage Site.

The ancient fish market of Catania, is one of the places to visit to look for fresh and excellent quality fish. You will find fish of all types and sizes, and very nice and friendly sellers. In general, the inhabitants of Catania have their own trusted fishmonger within the market.

This very picturesque market will make you experience a typical sicilian tradition of the past. La Pescheria is located near the Cathedral of Catania and is open from Monday to Friday from 7 am to 4 pm . 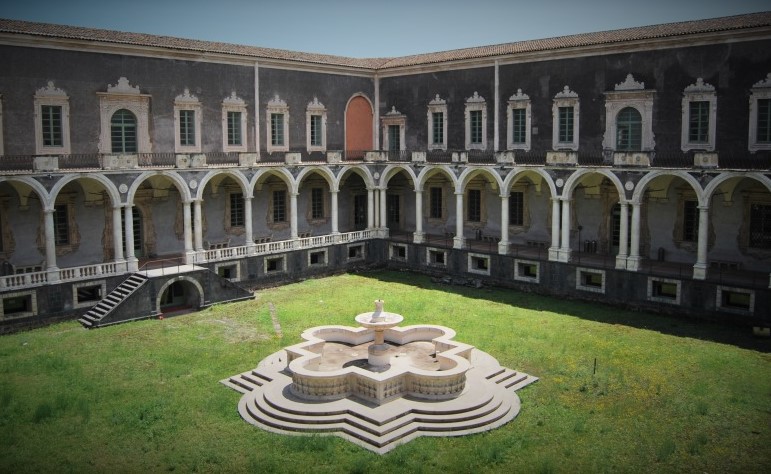 Built in the sixteenth century (1558) and rebuilt from 1702 after Catania was shaken by the terrible lava flow of 1669 and the catastrophic earthquake of 1693, today it is a jewel of the late Sicilian Baroque and this Benedictine complex is among the largest in Europe.

The size of the Monastery is immediately appreciated when you arrive in Piazza Dante. The dome stands out and therefore the silhouette of the actual monastery that looks more like a noble palace than a place of prayer. This building is an artistic and architectural concentration of quality.

History, charm and beauty are the words necessary to describe the Palazzo Biscari which is the largest baroque building in Catania. It was built in 1700 after the earthquake that destroyed the City. Today, besides being the home of the Biscari family, it hosts prestigious events. Located in the heart of the city and close to all the other treasures of Catania.

Ancient castle and now art museum: the castle was erected in the thirteenth century. During the Sicilian vespers it became the seat of the Parliament and later the residence of the Aragonese rulers. It is worth visiting this well preserved fortress and its impressive archeological collection. Tickets are around 10 Euro.

Etna is the highest active volcano in Europe and extended and is the fifth highest mountain in Italy. It is located west of the eastern Sicilian coast, within the territory of the province of Catania, between the courses of the Simeto and Alcantara rivers.

The volcano reaches a height of about 3320 meters above sea level, and has an area of ​​1570 km. Its height changes continuously following continuous eruptions.

The structure of the volcano consists of four craters, the central crater (the oldest of the summit craters), the new mouth (formed in 1968), the north-east crater (formed in 1911), and finally the south- crater. East (the youngest, formed in 1971) which in recent years has risen considerably thanks to the numerous eruptions.

In winter, above 1000 m, there is snow which often lasts until almost summer. Consequently, on Etna there are also two ski resorts whose peculiarity is that of being able to ski on the snow being able to observe the sea.

The Roman theater of Catania is located in the historic center between Piazza S. Francesco, Via Vittorio Emanuele, Via Timeo and Via Teatro Greco. Next to it you will find another smaller theatre called the Odeon.

Even today the structure is used in the summer for shows and festivals.

Among centuries-old trees, statues, fountains and shady paths we find one of the most beautiful gardens in Europe the “Bellini Gardens” or better known as the Villa by the locals. This lovely green area in Catania is located in Via Etnea. The gardens date back to the 18th century and it extends over 70000 square meters.

Inside the garden there are two small hills which are divided by a large flat area, used to park carriages until the early 1900s, now this area has no vegetation and is used to host theatrical performances.

Located right in the center of the city, in via Etnea 397 , the botanical garden, historic garden of the Etna city, is today a destination for many visitors who can admire, during all months of the year, precious botanical collections such as Palms, Succulents (over 2,000 species) and Sicilian spontaneous plants.

The garden, founded in 1858 by the Benedictine monk Francesco Tornabene, covers an area of ​​16,000 square meters and includes the general garden (which mainly collects exotic plants) and the Sicilian garden (intended for the cultivation of spontaneous Sicilian species).

During the spring and summer months the garden offers visitors suggestive night openings by hosting concerts and shows that have as their frame the elegant neoclassical colonnade that dominates the garden.

San Giovanni Li Cuti is a delightful fishing village located on the Catania seafront , easily reachable on foot from the elegant Corso Italia . The hamlet can be reached by taking a road that goes down to the marina and the characteristic black sand beach deriving from the lava rock.

The colorful fishermen boats and the bars and restaurants located around the marina and along the road make San Giovanni Li Cuti a particularly popular destination both by the locals and by tourists who discover, just a few steps from the frenetic pace of Catania, this corner quiet where you can taste the delicious lemon slush.

Catania offers unique urban trekking routes to visit the city in a different and exclusive way. Not a common itinerary in the city streets talking about the past, but an opportunity to look history in the eyes, going down to the heart of the city.

While you are in Catania and you fancy a day trip you definitely must visit Taormina.  Thanks to its enchanting position on the sea, the landscape beauties, the vast historical, cultural and archaeological heritage, Taormina is one of the most famous tourist resorts on the island. A place of great charm and beauty, this splendid Sicilian town has seduced poets and writers, attracted illustrious travelers, and welcomed celebrities of international fame. Visitors arriving from all over the world to see its Greco-Roman theater, to stroll along its medieval streets, to taste its excellent gastronomy, to admire its breathtaking views and to relax in the sun on its wonderful beaches. From Catania it will take about 45 mins drive.

Sicily where to visit: 21 best places you must see

Where was “The Inspector Montalbano” Filmed