Erice is a beautiful medieval village in the province of Trapani. Surrounding walls, paved streets, climbs, descents, churches and a view of the sea that can hardly be forgotten, this small town on the west coast of Sicily is a real beauty.

Perched on the slopes of Monte San Giuliano at 750 meters, Erice is a lovely place where time seems to stand still. From the top of the castle overlooking the town, the view is breathtaking as you can see Trapani and the Egadi islands on a clear day.

The Castle of Erice

The Norman Castle of Erice, or Castle of Venus, stands on the ruins of what was originally a temple dedicated to the goddess Venus Erycina in Roman times.

The remains of the structure visible today correspond to the fortress that the Normans built in 1100.

The castle also functioned as a prison and was connected to the Torri del Balio by a drawbridge, later replaced by the steps that can still be admired today.

The Torretta Pepoli was built by the Count Agostino Pepoli, from which the building takes its name. Placed on a cliff, in an enchanting panoramic position (which ranges from the Gulf of Bonagia to the city of Trapani and its salt pans), this building, built in liberty style, was intended to be a place of study and meditation.

Today the building, after a careful restoration that brought it back to its original beauty, maintains the charm of the time and can be visited.

The walls surrounding Erice were equipped with sighting towers, a walkway that was accessed through steep steps and small openings that allowed the passage of the inhabitants and perhaps supplies.

The best preserved stretch develops along Via dell ‘Addolorata, from Porta Carmine to Porta Spada.

A robust and unfinished building, begun in the XVIII century to house a garrison of Spanish soldiers but was never completed.
Located on a rocky lookout, outside the walls, near the churches of Sant’Orsola and Sant’Antonio.

From this place you can admire the stunning views of the valley and the sea; the eye can range from the Sicilian channel to the Tyrrhenian sea, capturing the coast and Monte Cofano in all its beauty.

In the restored rooms, there is a collection dedicated to old inhabitants and maritime art with the title “Arts and crafts of the past …”. 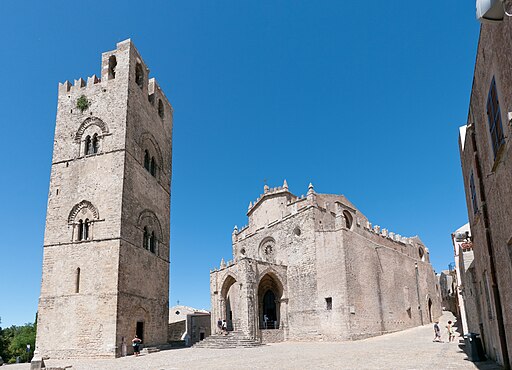 Built in Neo Gothic style and better known as the Duomo of Erice, the Chiesa Matrice which translated means “Mother Church”, is situated in the Piazza Matrice, near Porta Trapani.

The church stands on Monte San Giuliano, attracting all the attention: it is a perceptive magnet for the observer. The view is wonderful. Sky and sea merge together and the vegetation around makes it a very nice scenery.

At this Museum you can see various archaeological materials from the Prehistoric, Punic, Greek and Roman periods and also paintings and sculptures from the fifteenth to the eighteenth century. A collection of weapons from the Garibaldi period can also be seen.

The Church of San Martino is one of the most elegant in Erice. It was founded by Count Ruggiero in 1300 and built in Gothic style. At the end of 1600 it was demolished and rebuilt.

How to get to Erice

The most spectacular way to get to Erice is by cable car (funivia) that takes you from the outskirts of Trapani up to the Town wall of Erice with its station situated outside porta Trapani. The journey lasts about 10 mins where you can admire spectacular panoramic views of the city of Trapani, the sea and the Egadi islands on a clear day. The cable car runs all day every day but on Monday operates from 2pm.

If you don’t like heights you can always get a bus from Trapani to Erice which will take about 45 mins. On Sunday and bank holidays there are fewer buses running.

Finally you can always drive there is a car park near Porta Trapani.

Arriving from the valley of Valderice you will probably not even notice the existence of this village: perched on a high hill, Erice, is for a good part of the year wrapped in a dense white cloud that creates a kind of fog you see sometimes in movies. It really seems to be in another era walking around Erice: the steep and narrow streets, the little shops that sell the colorful Sicilian ceramics, the small pastry shops that, respecting the recipes of the past, selling tasty sweets, loved and known throughout Italy and not only.

I definitely recommend a visit to Erice, you will not be disappointed!

Where was “The Inspector Montalbano” Filmed

25 Best Things To See and Do In Palermo