Savoca is one of the most beautiful small towns of Sicily. It is located in the Province of Messina on top of a mountain. The town was founded in 1134 by Count Roger and was initially made up of a wall with two doors that protected a castle. It was influenced by Romans, Byzantines, Normans and Arabs. It was attacked several times by the Saracen pirates. Soon returned to being a point of reference for the aristocrats of Messina: proof of this are the numerous splendid palaces, still well preserved. If you are a fan of the “Godfather” you can visit the famous Bar Vitelli that featured in the movie.

See also: Where was the inspector Montalbano filmed 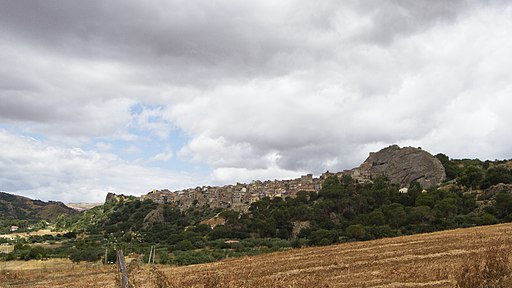 Sperlinga is a small Town located between the Nebrodi Mountains and the Madonie, in the heart of Sicily. Its main attraction is the Castle, entirely excavated on the rock in ancient times by native people. Inside it is possible to visit the stables, the prisons, the rooms dedicated to the blacksmiths and a series of places of worship.
Another interesting area of ​​Sperlinga is that of the rocky village, characterised by a multitude of cave houses probably dating back to prehistoric times.

Castelmola is a Town on the top of a hill 500 meters above sea level, overlooking the Ionian Sea in the province of Messina in Sicily, a few km from Taormina and Catania. This town offers beautiful panoramic views on the Ionian Coast, the town of Taormina and the Italian Region of Calabria.

The town of Montalbano Elicona is located on the top of a Mountain about 900 meters high, in the heart of the Nebrodi park in the province of Messina. Looking south you can admire the splendor of the secular woods that this area can offer, as well as the panoramic view of the other villages built on the tops of hills. Above all stands the white snow-covered peak of Mount Etna which seems to dominate everything with its massive presence. Looking North on a clear day you can spot Aeolian Islands. In 2015 Montalbano Elicona won the price of Borgo dei Borghi (the town of the Towns) of Italy.

Castiglione di Sicilia is located on the hills between the Alcantara Valley and Etna Park offering breathtaking views.
It was inhabited by the Greeks as early as 403 BC because of its location, and built a fortified lookout point on the rock to control the only access route to the interior of Sicily. Over the centuries, Romans took turns building bridges and the Arabs who revolutionized irrigation systems and even bred crocodiles in the Alcantara rivers.

Sutera is a small and fascinating agricultural center that dominates the hills below and the valley of the Platani river. The inhabited center was built around the slopes of Mount San Paolino (823 meters), a superb monolithic rock that dominates the area.

Marzamemi is one of the most beautiful and fascinating towns in Sicily, a small town whose history has been marked by fishing activity. It is a paradise of stone houses contrasting the color of the sea, to be discovered slowly and  admire the most beautiful views. Dominating the small town with stone houses is its tonnara, dating back to Arab times.

Scicli is a lovely Baroque Sicilian town, surrounded by the Iblei Mountains. The fascinating landscape rich in limestone houses, carob trees, steep walls, small churches and caves makes Scicli a gem in the heart of Sicily. Scicli is also known for being the filming set of the famous Italian TV series: Inspector Montalbano. The beautiful building of the town council is, in fact, the police station building in the imaginary town of Vigata.

This beautiful town is located in the province of Agrigento and has Arab origins. In 2016 this town has won the price the Borgo dei Borghi (the town of the towns): a well-deserved recognition, which made this place very popular and acted as a driving force for the local tourism. Set on a hill, it is nestled in the Belice Valley, 90 km from Agrigento and 82 km from Palermo. Surrounded by woods and hills and other numerous small villages.

Among all the Sicilian towns, Gangi is one of those that have experienced the greatest success in recent years in terms of notoriety and influx of visitors thanks to an impressive series of awards such as Borgo dei Borghi in 2014, Jewel City of Italy in 2012, to name the biggest two. This is how Gangi, a jewel set in the Madonie Park in the province of Palermo has become one of the most popular destinations amongst tourists in Sicily.

San Marco D’ Alunzio is a charming Town, in the province of Messina which sits on a hill of the Nebrodi Park from which it is possible to admire the sea and the beautiful Aeolian Islands. This beautiful town was included among the most beautiful villages of the Italian peninsula. The town boasts extreme beauty, thanks to the remains of the castle that are found on the upper part of the town and the Temple of Hercules, built in the 4th century BC Thanks to its historical and artistic value, this is certainly one of the most important monuments of San Marco.

This lovely town is located in the Madonie Park and was also included in the list of the most beautiful towns of Italy. Geraci has ancient origins dating back to the Middle Ages.

The sicilian town of Castroreale is located in the Province of Messina. In 2018 entered the circuits of the most beautiful towns in Italy. Castroreale is located on a hill (Torace hill) in the North-West of the Peloritani Mountains. This is a lovely Medieval town with narrow steep  streets and alleys which open onto beautiful belvedere squares where you can admire the wonderful panorama.

Palazzolo Acreide is a Sicilian town in the province of Syracuse. It is an ancient city full of charm, history, culture and tradition. It was born in the heart of the Iblei Mountains, where the Greek city Akrai once stood. A city to be discovered step by step, where the new merges with the old and in an intense harmony create an enchanting landscape. There are several places worth visiting in Palazzolo Acreide, starting from the two churches recognized as UNESCO World Heritage Sites: the Basilica of San Paolo and the Basilica of San Sebastiano. If you visit Palazzolo in August don’t miss the colorful Festa Di San Sebastiano as shown on the picture above.

Ferla is located in the Province of Syracuse, on the Iblei Mountains, within the Anapo valley.  This small town in the Val di Noto was rebuilt after the great earthquake of 1693 in the same Baroque style as the other towns of the Val di Noto. In Ferla you will also find many underground caves parts of an Hellenistic Necropolis.

I would like to end this article with Monterosso Almo, a lovely town in the Province of Ragusa. Monterosso was also destroyed in the 1693 Earthquake. It is lovely to walk around the many narrow streets and admire the lovely stone paved alleys.